06.03.2020 - With the INVICTO the car manufacturer and general contractor Brabus Automotive presents in March 2020 a world premiere an armoured version of the new Mercedes-Benz G-Class und thus sets benchmarks at the same time. The so-called INVICTO Shelter Cell meets OEM factory armouring standards. Among others, hot formed armouring steel plates and as an absolute innovation 3D-printed protection parts are being used for it. The ballistic protection level is VR6, however extended by a side blast protection at the level of a luxury state limousine. And finally the INVICTO VR6 Plus ERV is being certified as a complete vehicle. “ERV” by the way stands for “Explosion Resistant Vehicle” and attests the blast protection. Referring to individual purposes or personal needs the customer can select between three different and exciting lines PURE, LUXURY und MISSION:

The INVICTO MISSION is made for missions and more. Special target groups have special requirements to an armoured vehicle. With the MISSION Brabus Automotive complies with this in every way and meets the exceptional demands for challenging purposes. With its sophisticated interior and the exterior features, like protection vest compatible integral seats with variable foam geometry, “MOLLE”-system door panels and seat backs, a roof rail system, a digital rear display mirror, the Acetech system with two touch control panels, an intercom system and 20“ rough profile off road tires the INVICTO MISSION is especially made for special forces. Of course, the INVICTO MISSION doesn’t only provide reliable protection at VR6 plus ERV level, it also fulfils the highest demands regarding suitability for everyday use, comfort, driving dynamics, active and passive safety as well as manufacturing quality. Therefore the INVICTO MISSION is the perfect trace protection and escort vehicle with military compatible interior and special exterior features and offers furthermore lifestyle, too.
For an individual configuration of their INVICTO customers can select for the three different lines various options from the accessory program, for example a lightning and signal systems, auxiliary roof lights, a fire extinguishing system, an IR package including a night vision device, a fresh air system with ABC filter or an escape hatch , just to mention a few.
The highest technical standards were also paramount for Brabus Automotive when it came to developing the new armoured vehicle based on the Mercedes-Benz G-Class. Right from the very start, the overall ballistic concept was designed for a maximum protective effect corresponding to the level of OEM factory armour plating. Unlike with other retroactively armour plated vehicles, the components of the protection system were not individually welded into the vehicle’s bodywork structure; rather, the engineers at Brabus Automotive developed a self-contained, self-supporting, bolted structural cell, the so-called INVICTO Shelter Cell. It is inserted into the body shell in a disassembled state and then constructed. One of the structural features of the shelter cell is the zero-joints design which means that there is absolutely no entry narrowing – similar to a vehicle armour plated in an OEM factory. The armour components are mounted to the shelter cell without any gaps. Unavoidable weld seams, on the doors for example, are achieved with material overlapping and so-called labyrinths. The design of the upper windscreen frame is also innovative. Christian Draser: “For the first time anywhere in the world, we’re using protective elements here, which are produced in an additive manufacturing process in a 3D printer. We’re definitely the first to do it.”

The shelter cell is validated using the latest processes and methods, which are also being used at the OEM. The development team at Brabus Automotive combined virtual simulation procedures with real tests on test samples. It was only once the individual elements of the shelter cell proved their protective effect that the entire cell was tested in the vehicle. Every single material pairing and screw connection was tested by being shot at from several angles and at projectile speeds which are well beyond the standard speed of the calibre being protected against. Furthermore, individual assemblies were also subjected to several explosions in preliminary tests in a so-called blast frame. Brabus Automotive is taking its own time-consuming path here, too, as the effect of special protective measures is not usually specifically tested for retrofitted vehicles. “By contrast, we have the entire vehicle certified by an accredited German ballistics authority, both with regard to being fired upon and being subjected to explosions as per resistance class VR6 Plus ERV,” says Christian Draser. The side blast protection (ERV) is quiet at the level of a luxury state limousine.

The added weight of the overall vehicle due to the armour plating is comparatively low at around 1,000 kilograms, but the load-bearing capacity of the chassis must be modified to meet the high requirements of Brabus Automotive when it comes to driving dynamics and life span. The necessary adjustments cover the entire front and rear axle construction of the vehicle. The entire wheel suspension, for example, has been replaced by own new development, while frame reinforcements around the longitudinal beams and the spring dome increase the strength of the original vehicle structure. The obligatory verification of the new construction included simulations using the finite element method (FEM), component analyses, stationary endurance runs and road tests. Thanks to this process established by Brabus Automotive, the extreme lifespan requirement can be ensured in accordance with OEM requirements, even with materials under the greatest of loads. 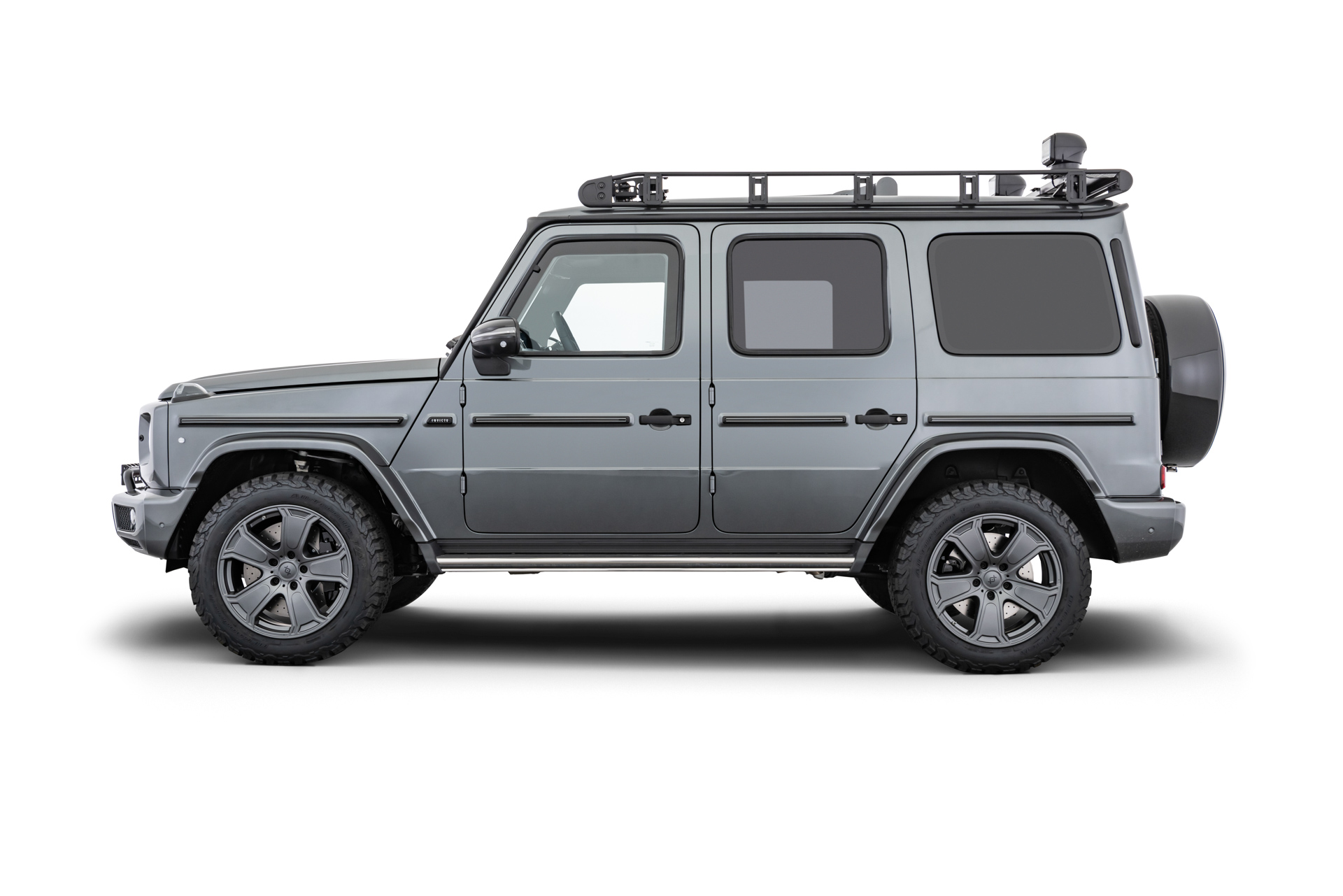